Congratulations to Shashwat Deepali Nagar (PhD) and Ajay Bharadwaj (MS) who were recognized as the 2021 Outstanding Students in Bioinformatics at Georgia Tech. Each student received a monetary award funded by the J. Leland Jackson Endowed Fellowships Fund in Bioinformatics. Students were selected for demonstrated excellence in their academic studies and their bioinformatics research. Shashwat Deepali Nagar Shashwat is a graduating PhD student in Bioinformatics, working in the Jordan Lab on understanding the impact of ancestral origins on health disparities. His research at Georgia Tech demonstrates that using information on ancestral origins has the potential to improve health outcomes for diverse populations in developing countries as well as underserved minorities in developed nations. Ameliorating health disparities - avoidable differences in health outcomes between population groups - is both a social imperative and a pressing scientific challenge. Even though genes and environmental factors work together to affect health outcomes, health disparity research programs tend to be siloed with a narrow focus on either genetic or environmental contributions to health differences among groups. There exists a tremendous yet unmet opportunity to overcome biases via a more inclusive research design that focuses on diverse genomic cohorts. Population biobanks already rich in genomic diversity can be leveraged to explicitly addresses the role of genetic ancestry in influencing health outcomes. Shashwat's work highlights the utility of considering population genomics and ancestral origins concurrently with environmental factors in health disparities research to identify more targeted alleviation strategies. This can be the first step towards health equity. During his five years in graduate school, Shashwat has maintained a GPA of 4.0 and has also done summer internships at the Mayo Clinic (2017) and Regeneron Pharmaceuticals (2020) to gain experience in an applied setting. His work at Regeneron during Summer 2020 was selected for an organization-wide project showcase where six intern projects were highlighted out of hundreds. In addition, he traveled to Medell√≠n, Colombia in Summer 2019 to work with collaborators at GenomaCES. Including some publications in preparation and under review, Shashwat will have 17 publications upon graduation in December 2021. He has also given 10 professional talks at conferences. According to Professor King Jordan,"Shashwat is a truly outstanding and exceptional student who is absolutely deserving of this award. He is the rare bioinformatics student who is equally adept at both software development and data analysis (applied bioinformatics). He is equal parts brilliant and hardworking, and he also happens to be a genuinely nice guy who spends a great amount of time supporting the work and studies of other students. Ajay Bharadwaj As an MS Bioinformatics student, Ajay has worked in the Lachance Lab, where his research was focused on two important aspects: Building an infrastructure which would enable us to easily study Ancient DNA (aDNA), and using the database to analyze how the complex traits have evolved over time. The former was accomplished during the first semester of his master's where I built the aDNA database and this was used to answer some interesting questions. As part of my project, Ajay built a pipeline to calculate Polygenic Risk Scores for any trait on the 1000 genomes project, which led him to be a co-author on the manuscript"Do effective population sizes govern differences in telomere length". As part of Ajay's coursework, he completed many projects on RNA and DNA sequencing analysis. As part of the group, he built a pipeline to analyze a foodborne outbreak from real data taken from the Center for Disease Control. With these projects, he learned how to effectively work in a group setting, and learned all the necessary bioinformatics skills that would help him thrive in the industry. During the summer, Ajay was a paid computational toxicology intern at Vertex Pharmaceuticals, where he worked on a project to"predict pathology based on molecular markers." Ajay has maintained a 4.0 GPA throughout the MS Bioinformatics program. Professor Joe Lachance says,"Ajay's research requires an ability to come up with creative solutions to data storage and access, he has done exceptionally well in this regard. He is an intelligent student who isn't afraid to ask questions and come up with his own solutions to problems. Ajay stands out in his enthusiasm and eagerness to learn and take on new challenges. He is someone who jumps at the chance to help out, and has helped train an undergraduate, as well as double check the work of other members of my research team." 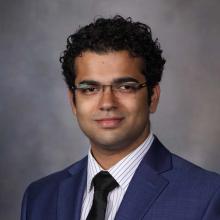 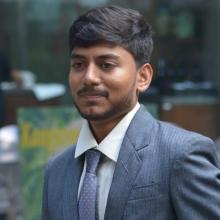 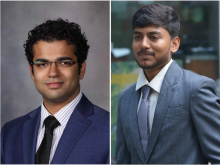